The Myth and Madness of Multitasking 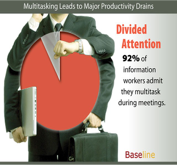 There is a decade of research indicating that multitasking does not increase productivity. In fact, some studies (Rubinstein, 2001) indicate that multitasking can actually result in us wasting around 20-40 percent of our time, depending on what we’re trying to do.

For some, multitasking means doing two or more tasks at the same time. For others, it means switching back and forth from one task to another, sometime in rapid succession.

Currently, the way leaders use multitasking borders on madness. Rather than using the research about the detrimental impact of multitasking upon our effectiveness, leaders are using it more than ever. Some inappropriate multitasking may be a result of downsizing and the push to do more with less. However, in many cases, it’s not only doing more work with fewer employees, it’s doing more different types of tasks. Many in leadership positions, no longer have the support staff they had and are required to complete tasks not within their areas of strength. As they add on, new, often tedious tasks, the tendency is to inappropriately multitask.

Imagine the lack of focus and attention during meetings if even 50% rather than 92% of meeting attendees are texting, interrupting others by responding to calls, trying to answer emails, or using the Internet with their tablets. How much respect is shown to others when such multitasking is allowed?

On a personal level, think of the ways in which multitasking is ineffective for you.

Most commonly, there are performance slippages when you try to complete two tasks at once; you reverse numbers,  misspell a word, or forget a detail. 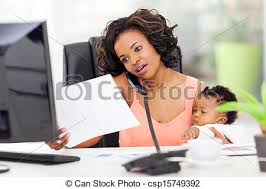 The need for uni-focus is greatest when analytic or creative thought is required. In addition, every time you are interrupted or interrupt yourself, it takes time for your brain to refocus.  Lastly, after a time, your stress level rises and/or you feel fatigued.

To enhance productivity, especially during meetings, leaders need to discuss the ineffectiveness of multitasking and model the use of total, rather than partial, attention to task.

Here are some tips to decrease your tendency to inappropriately multitask:

In summary, there is a myth that multitasking increases productivity. In fact, according to some researches it can reduce productivity by up to 40-percent. In addition, switching from one to another task requires time to get back on track, makes us more vulnerable to distractions, and is tiring. Leaders have more choice and control over current multitasking habits. You can model and lead the way to greater productivity and less stress.